Theory on Origin of name REYNISH

This was sent by Nick REYNISH in June 2013
I have no definitive answer.
One source claims that we are descended from the Rheni tribe in what is now Germany - a tough warrior tribe, some say.  We thus gave our name to the Rhenish area (and therefore Rhenish wine, see below) and indeed the Rhine itself.
My own research suggests that this is back to front.  The name "rhine" is rooted -  via Old English, Dutch, German, Celtic, Frankish etc - in an old Indo-European word meaning "to flow" or "to run", i.e. an apt name for a river.  I don't think there was a single Rheni tribe - I think the name refers to a number of tribes who lived in that area.
For example -
...Philipp Clüver's first work, in 1611, concerned the lower reaches of the Rhine and its tribal inhabitants in Roman times (Commentarius de tribus Rheni alveis, et ostiis; item.)
In short, we came from the Rheinland area famous inter alia for Rhenish wine (also rhenish bricks, rhenish style of bookbinding, etc)  There are references throughout literature, including:

The Merchant of Venice, Act I Scene 1

NERISSA. How like you the young German, the Duke of Saxony's nephew?
PORTIA. Very vilely in the morning when he is sober; and most vilely in the afternoon when he is drunk. When he is best, he is a little worse than a man, and when he is worst, he is little better than a beast. An the worst fall that ever fell, I hope I
shall make shift to go without him.
NERISSA. If he should offer to choose, and choose the right
casket,you should refuse to perform your father's will, if you should
refuse to accept him.
PORTIA. Therefore, for fear of the worst, I pray thee set a deep glass of Rhenish wine on the contrary casket; for if the devil be within and that temptation without, I know he will choose it. I will do anything, Nerissa, ere I will be married to a sponge.

Pat is sure many researchers know about the initiative by the National Library of Wales to put Welsh newspapers on line for FREE. However see:

It is still in experimental (Beta) stage but if you search "REYNISH" you will find 215 entries. Pat suggests you use the inverted commas when searching. The main discovery (Pat didn't know this but perhaps our NZ cousins did) is that James - possibly George's brother died from an accident while he was building in Quay St., Haverfordwest. This happened in August 1860. George was found in 1861 census on board "Jane Glassin".  This is not the James who was George's father as he and Mary (DAVIES) are in the 1861 census in Haverfordwest. It says that James' home was in Portfield and this is where Mary is living as a widow in later censuses so Pat feels there must be a link.

Thanks mainly to FIND MY PAST providing many Welsh records to their site.......
Pat is pleased to say that she has added quite a bit of information (after 1837) to her GoONS website. This is NOT complete-you will see many gaps. The Goons archive is free to search and if you want more details about anything or anyone please contact her on reynish@one-name.org
look at:

PLEASE always pan to the extreme right to get "Details" about the individual people and further information. I have tried not to use abbreviations but Chapman Codes are used for counties eg: PEM for Pembrokeshire, GLA for Glamorganshire. For a full list just Google "Chapman's Codes". Remember that it is possible do a "General Search" of all the records available. Try typing Reynish as a forename - there are a few and hopefully more to come.

A summary of what is now added to the basic information of Surname, Forename, Year, Quarter in which the event was registered, Registration District and reference  is below:

Civil Births in England & Wales -1837 to 2006
added (where known) is the date of birth, location, baptism date, names of parents, address, Occupation of father, Miscellaneous information and source of information.
Please note that some children's births were not registered and every effort is being made to find their baptisms or other birth records between these dates.

Civil Marriages in England & Wales - 1837-2006
added (where known) is the spouse's surname  and forename, location of marriage, age, status, occupations, Fathers and their occ., witnesses, by licence or banns and source.

Civil Deaths in England & Wales-1837 to 2006
added (where known) is age at death, date of birth and death, location of burial and address, burial date, name of spouse and parents and miscellaneous information and source.

Now Pat is collecting pre-1837 data - that'll be fun! As usual if you can help out with any additional information it will be added to the lists for future researchers.

Pat has changed to Roots Magic as a database. This gives a website facility that she can put online hopefully at the end of 2013. Unfortunately her personal circumstances have not changed so no reunion is planned in the foreseeable future - sorry!
Posted by Pat (Heard) Wilson at 06:08 No comments:

Good news is that Pat has updated the REYNISH archive on the Guild of One-Name Studies website. See...

It is now an open archive (i.e. no need to register with Pat in order to see it). Anyone can use it.

Pat has added to BIRTHS index from 1837 to 2006 and will shortly add any christenings or baptisms she can find to correspond with these births.

Also MARRIAGES have entries have increased from 1837 to 2005. Several of these marriages have full details with them so be sure to pan well to the right and click on "Details" for this information. If you are willing to donate any  information on the marriages that have no details it would be really good if you could contact Pat on reynish@one-name.org

Also DEATHS from 1837 to 2005 are upgraded. Burials will be added shortly for some of them.

You can now make a "General Search" across all the records on this site. See at the bottom of "Contents of Reynish Archive". So for example if you enter "James REYNISH" you will see the number of entries for that name collected SO FAR and you can click on these numbers to access the records. These include all the censuses from 1841 to 1911 in UK as well as probate and adoptions and of course the BMDs mentioned already.

Bad news is that Pat regretfully cannot organise a REYNISH reunion in October 2013, as she had hoped, due to family circumstances. Her 99 year old mother, brother and husband all have health problems. So instead there will be a concentration to add to this archive as much as possible in the coming months.

The committee of the Guild of One-Name Studies request that all its members nominate someone to take on the archive in the event of the member's death or incapacity. This nomination would be done legally in Pat's will. A volunteer or volunteers would be welcomed. She is not giving up just yet but would like to know of someone who is interested....to contact her see:
http://www.one-name.org/profiles/reynish.html
Posted by Pat (Heard) Wilson at 10:17 No comments:

In October 2012 a medal was advertised for sale on E-bay in Australia. Unfortunately in spite of Sue Hateley's best efforts it was sold for £80+ to an unknown person.
Private Robert Stanley REYNISH (Stan)'s history is excellently covered on page 171 (where a photo can be seen) in Denise & Tony CRAFTS book "From Pembrokeshire to the Peninsula".
Briefly he was 5th son of George REYNISH of Pigeon Bay, New Zealand born on 1 Jan 1892. He went to stay in Australia prior to WW1 where his sister Rachel COADE was living. He enlisted in 24th Battalion, 3rd reinforcement on 18 June 1915 and embarked from Melbourne, Victoria on board HMAT A68 "Anchises"  on 26 August 1915. His embarkation number was AWM 23/41/2. He served in Galliopoli, France and Belgium. He was gassed and returned to Australia on 16 December 1917.
He then continued on to New Zealand  to Greymouth where his mother Avis was living. He remained single. He died in Christchurch Hospital in 1921 and is buried in the Bromley Cemetery there.
His regimental number given here is 2489 but this conflicts with other information that says it was 1989.

A "new" photo has been donated by Mike Bennett, our friendly local historian in Roch (no date for photo unfortunately). He says it is thought that the lady in the middle right in a black skirt is said to be Louie REYNISH from Roch Bridge just across the bridge from Roch Mill. The rest of the people are thought to be the WATTS family of Roch Mill. 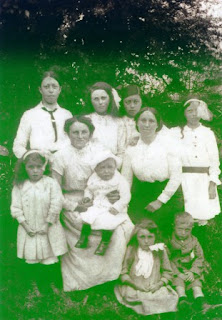 Sure enough she did live at Roch Bridge and is described in 1911 census as "sister" of Sarah REYNISH (unmarried) the publican of Roch Bridge Inn, Penycwm.
However Pat thinks she is the half sister of Sarah and is the daughter of Mary GRIFFITHS who married John REYNISH in 1843. Louisa's date of birth varies between censuses from 1834 to 1839 in the censuses so it appears she is not his child. However John and Mary did produce Thomas, Sarah, James and William.
Mary's mother was Ann GRIFFITHS who ran the "Farmers Arms" at Roch Bridge. In the 1851 and 1861 censuses Louisa is described at Ann's granddaughter. In 1871 John REYNISH has taken over the pub and Louisa (still named GRIFFITHS) is described as his stepdaughter.
In 1881 she suddenly is called Louisa REYNISH and described as John's daughter.
In 1884 she married James LEWIS. However she marries him as Louisa GRIFFITHS so she has not had an official change of name. Thereafter she is known by her married name. James seems to have died between 1901 and 1911 censuses but Louisa lives on until June 1916 Pat believes. She was aged 79 in the GRO index for Haverfordwest RD so born 1837.
As usual this needs follow up research-baptism, marriage & death or burial records but if anyone knows anything about her please help.

Thanks to Ted REYNISH Pat has been alerted to, perhaps, the earliest mention of a REYNISH in Pembrokeshire.

If you look at:

This gives you the previous incumbents of Monkton Rectorial Benefice. Richard REYNISSHE was an incumbent there at St Twynnells in 1398 (Yes! thirteen hundred and ninety eight!)

If anyone has anything further to add please do!

REYNISH OR RAINES COAT OF ARMS? 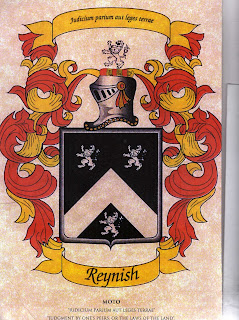 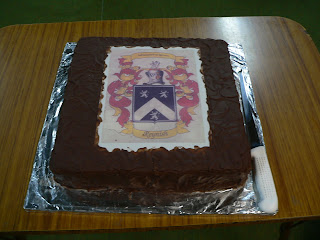 This blog may be a little controversial and Pat would welcome input and discussion about it. Here is a photo of the Coat of Arms that the REYNISH New Zealand cousins have adopted and put on their cake at their reunion in February 2010.
The same image appears in the frontispiece of the story of the New Zealand immigrant written by Denise & Tony Crafts.
However when trying to find out more about the heraldry Pat came across the same coat of arms for the family RAINES. Please see the URL below for House of Names website below. It is believed that this company is based in Canada.
http://www.houseofnames.com/fc.asp?sld=&s=raines
Pat has not come across RAINES as a variant of REYNISH as yet. Could someone please enlighten her to where this claim to the coat of arms originated please as she collects all evidence.
ADDITIONAL INFORMATION....
23 September 2010
Further to this subject please see the Surname database entry:
http://www.surnamedb.com/Surname/Renish
RAINE is included here as a diminutive variant of RENISH

Pat (Heard) Wilson
I am retired. I have been researching family history since 1981 and discovered that my great grandmother's name was Eleanor REYNISH. I had not heard of the surname before that. She married Henry HEARD (my maiden name). As I thought there would only be a few mentions of the surname of REYNISH I undertook to start a one-name study. There are more than a few but it is a fascinating study. Now has come a time to share my research and I would like people to contact me for FREE exchange of information.